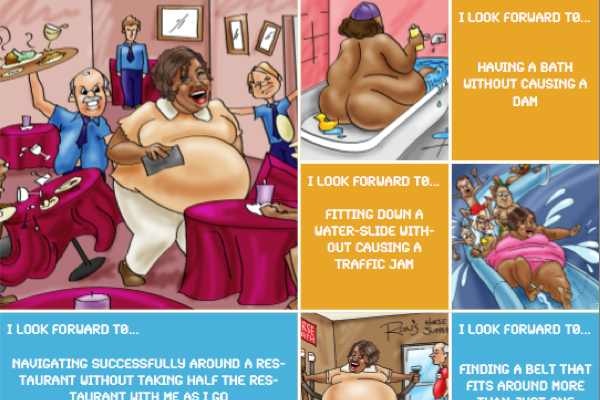 Is there room enough in the world for fat people?Â  If calculations are correct, physically, there is.Â  Not counting Antarctica, the population density of the planet is 115 persons per square kilometer.Â  Some say the earth’s population can fit into one city; others claim we can all fit into the state of Texas (but Texans are known for their absurd claims on size, so I’ll have to get back with you on that one).

And yet there never seems to be enough room when an obese person comes around.Â  Those who don’t have a few stone to shed may feel embarrassed for that person, but it is nothing compared to the shame felt by the obese for taking up more space.

That shame is compounded when you’re young.Â  Other adults may not openly ridicule you for being fat, but kids feel no such restraint.Â  Kids who are labeled “different” don’t find much sympathy from their contemporaries and overweight children are no exception.Â  They embarrass their classmates.Â  When you’re an adult, the judgmental looks and comments about your weight still hurt, but at least you’re skin has grown thicker over the years and they don’t hurt as much.Â  Or maybe you just retreat further into denial to escape the pain.

Sometimes obese people encounter not just ridicule but intense hatred and spite for being what they are, because as everyone knows, obesity is totally that person’s fault.Â  Can’t blame genetics or upbringing.Â  It’s not an addiction.Â  There’s no excuse.Â  And there’s just no room in the world for people like that.Â  They’re unacceptable.

Despite the rise of obesity in the world, food manufacturers and fast food restaurants still cater unhealthy food choices (and yes it is a choice.Â  Nobody’s forcing anyone to eat super-sized portions).Â  Clothing retailers offer fewer items for bigger people.Â  Magazines perpetuate the fantasy that everyone is thin, beautiful and rich.Â  Television and films would have any aliens who stop by the planet believing that we all come from Southern California, complete with perfect tan, impeccably sculpted body and whitened smile.

Mongolia, the world’s least densely populated country, contains only 4.3 persons per square kilometer.Â  Perhaps all overweight people can move there, out of sight and out of mind.Â  That way, no one is uncomfortable or embarrassed about being seen around a fat person.